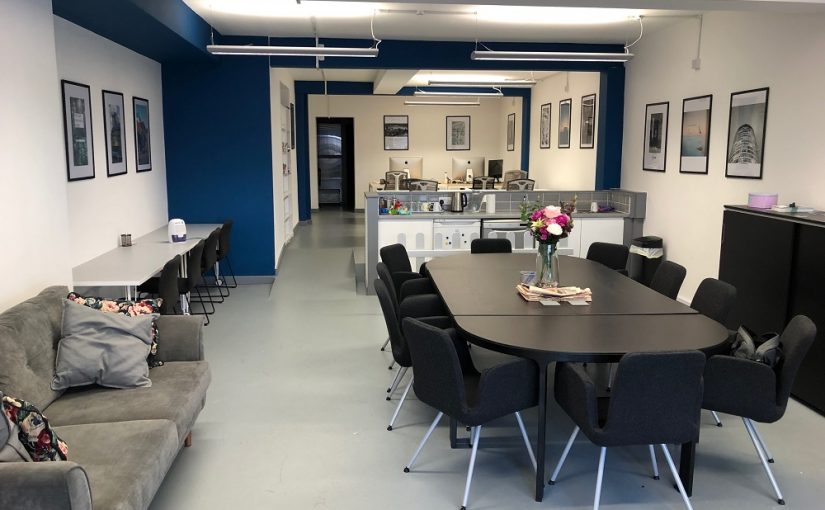 With more people doing freelance work, working for themselves or working in small business startups, there are more people than ever without an office space in the traditional sense. However, what if you are someone who finds a more social atmosphere is the most productive? Many people find a traditional office environment to be the most beneficial way to work easily, without the distractions of home or a public area.

The term was “coworking” first launched in 1999, by Brian DeKoven. In the same year, one of the first studios opened in New York City, called 42 West 24. Then, in the UK, the first coworking space wasn’t opened until January 2005 in London. However, the term only became popular in March 2007, when it was trending on Google Search. Soon afterwards, in October 2007, it was listed as a term on Wikipedia.

Since then, it has only expanded in popularity and many offices have been founded. It is easy to understand why the demand for the spaces has developed so rapidly, as there are many positives. The pros easily outweigh any potential cons.

In starting up your own business beneficially, it is paramount to create connections and utilise networking to succeed. This is one of the main pros of a coworking environment – everyone you meet and work with is a potential network connection, or even a client. You meet dozens of people simply through working alongside them during your normal day.

Asides from networking, the people you work with in a coworking space can benefit you and your business in another way. Ideas people thrive in a situation where you can bounce ideas off others, as it creates a more stimulating environment. Other people and businesses are willing to help you out, and often an exchange of services can be given. For example, a website designing business may work in the same space as a marketing business, and they could compliment each other by exchanging certain online services.

In a coworking office space, there is an existing sense of community. This creates a certain feeling of belonging, which you wouldn’t necessarily get from working alone or at home. Your colleagues become your friends, as well as associates, which is one of the most enjoyable factors about traditional office work. It also creates the opportunity to still participate in work events.

As with most things, there are downsides – yet, there aren’t a lot of cons. However, the one recurrent negative seems to be the noise levels, particularly when someone appears to be persistently loud. If a space is too noisy or crowded, it can become difficult to concentrate and work to the best of your ability. Although, if everyone in the office understood the necessity to keep the noise level at an acceptable level, then there wouldn’t be a problem.

The only other negative I uncovered is the feature of messiness in a coworking environment. This is something that can’t easily be avoided in any work office space situation, and you may often find yourself guilty of slacking off your cleaning duties when there’s work waiting! A factor that’s similar and does relate to coworking, however, is the concern with who provides the general amenities, such as toilet paper, washing up liquid, milk and teabags. Each space is different, but in general it is the facilitator of the particular space who takes care of those things.

Yet, despite those, one of the main positives of a coworking environment is that it creates freedom for you and your business. The hours are more flexible than your typical nine-to-five, and, if you work for yourself, you can pick certain days to work in the space and other days you can work from home. The point is to be flexible and help each business succeed in their individual way.

Ultimately, coworking is all about the people, who become your friends and motivators in your business. The spaces are generally open and designed to enhance productivity in this professional environment. You have the freedom to interact and generate social and professional encounters, or simply choose not to.

Coworking is a far more stimulating environment for freelancers and small businesses, rather than working from home. The interaction and sense of community generates productivity, collaboration and resulting success for everyone involved.